When you start researching your family tree its always with a hope that you’ll find something juicy, a ‘skeleton in the cupboard’, a story that stands out.

A few years ago I’d been told by my Dad’s cousin in Tipperary, that they had a grand-aunt Mary who had emigrated to the US, and was killed by her husband in Montana, and he wondered if I could find out more! This was the story I was waiting for! However, there was little else known about her, including her married name. I put it aside hoping that he’d find something among his documents and photos that might give me a lead, and come back to me.

The Genealogy bit – digging for records

Fast forward to last November 2018. I was due to meet with family and knew I’d be asked if I ever found out what happened, so I decided to do a quick check online to see if I could find anything. Well, it didn’t take me long. I decided to search for a marriage of a Mary Maher with parents Jeremiah Maher and Mary Gleeson, in Montana. The result was a record of a marriage index for a Mary Fitzpatrick to a Porter Roach but her parents matched. (The reason she was listed as Fitzpatrick was because she must have been married once before and that was her name at the time of her second marriage). This marriage took place in Glasgow, Montana in 1907. The next step was to look for a death record of a Mary Roach and one turned up for 1909! She was only married two years.

Being a genealogist and loving a mystery to get my teeth into, I started thinking about how I would find out more about her death. The fact that I was living outside the US meant I had to think how I could source records in Montana. As I know from experience, a local history society can be a treasure trove of sources and local knowledge so I checked to see if there was one in Montana that might give me a lead. I found the Montana Historical Society had a website so I searched for Mary Roach and up popped a page with details of biographical files held. This piqued my curiosity – biographical files wouldn’t be held on everybody who lived there so there must have been ‘Something about Mary’ !

“Mary’s story is so interesting!”

I made enquiries and got a reply saying Mary’s story was so interesting. They held a number of articles in the file about her life and death but as I was from out of State I’d have to submit a form and pay a fee. Of course I had to see what they had. I sent off the fee and my request form and received a package 2 weeks later. Inside were newspaper articles, 2 of which were from the week she died, and others were in the 1930’s and 1960’s covering the founding history of Glasgow, Montana and notable pioneers. They also provided a copy of relevant pages from a 75th anniversary souvenir publication on the town’s history that included mentions of Mary’s business (more about these in Part 2!)

The Valley County News dated Friday July 16th 1909 had a lengthy column titled ‘ A pioneer dies suddenly’  which detailed the death of Mary Fitzpatrick Roach. According to the article Mary had died the previous Friday, 9th July :

“R.M. Young was in his room adjoining Mr and Mrs Roach’s apartments, when he heard Mrs Roach call him”

He found her in a pool of blood, got assistance and the doctor arrived. It appears her nose was broken, she was ‘suffering considerably’ , was given a morphine injection and a short time later she died. The article goes on to say ‘as the circumstances seemed to indicate that her death was not due to natural causes, Coroner Peterson took charge of the remains and held an inquest and post mortem examination on the Monday evening. 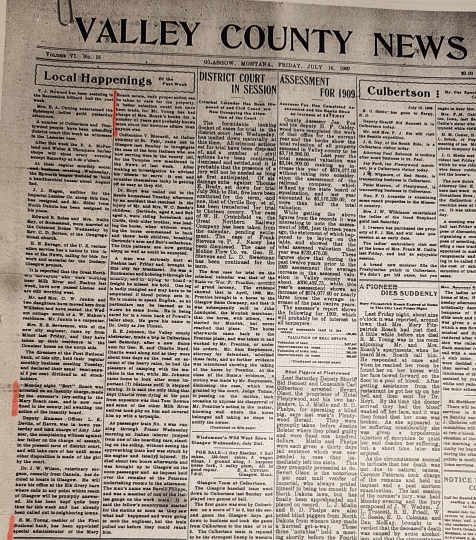 Strangely the Coroner’s jury brought in a verdict that ‘the deceased’s death was caused by acute alcoholism and that the circumstances did not justify the jury in implicating anyone in the cause of her death’ but on the front page of the same paper hidden under the column titled ‘Local Happenings of the past week’  it states ‘ Monday night ‘Port’ Roach was arrested on an insanity charge made by the Coroner’s jury acting in the Mary Roach case and is now confined in the county jail awaiting the action of the Insanity Board’…. (No further details were found to see what happened to him but I found a reference to his death in 1911).

Further down in the same column: ‘R.M. Young, cashier of the First National Bank, has been appointed special administrator of the Mary Roach estate until proper action can be taken to care for the property’. This is the same R.M. Young who came to her assistance.

What a tragic end but ‘Mary was so interesting’ – that story has yet to be told – in Part 2! If you found this blog interesting and would like to be notified of the next installment in Mary’s story, I’d love you to follow my blog site.